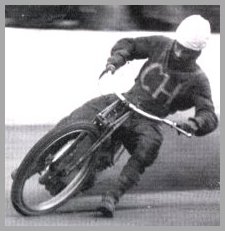 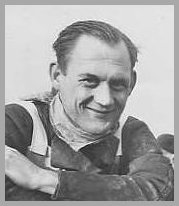 Alan Hunt followed his Royal Navy exploits as a deep sea diver during the war years, by discovering the Speedway training school in 1947 at Perry Barr, Birmingham. He went virtually straight into the newly formed Cradley Heath team at reserve and made an enormous impression for his sheer gutsy enthusiasm and determination. He moved up from reserve in 1948 and formed a fearsome partnership with Eric Irons. This was tempered at times however by machine problems and inconsistency.

Towards the end of the season, they were sorted out with a new bike and there followed the start of a period when the Dudley Wood track record was demolished time and time again by the rapidly improving rider, known affectionately by the fans as 'Our Whacka'. He became the master at diving under the opposition and elbowing his way up the inside.

Alan's successful seasons as a Heathen were in '49 and '50, but the latter of these was a somewhat turbulent affair. He led the team to victory in the Kemsley Southern Shield and took the Silver Helmet match race championship within the first two months. This however led to a transfer request and Division 1 seemed to beckon. But after a collapsed move to Harringay, Alan finished the season at the Wood in style with 13 maximums, another new track record and the honour of the first second division rider to gain England international recognition.

In 1951, Hunt inevitably moved on and joined Birmingham where he went on to enjoy six successful seasons, many as number 1 and captain. During that time, he qualified for three world finals in 1951,53 and 56. His performances improved gradually as he scored two,three and six points respectively.

He eventually skippered an England touring side in South Africa, but this was sadly to prove his last adventure. He crashed while leading a race on the 2nd February 1957 in Johannesburg, and suffered fatal injuries.

His legend lives on and he remains quite possibly the first successful Heathens hero, as predecessor to the likes of Ivor Brown, Bernie Persson and Bruce Penhall.