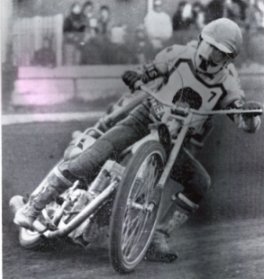 Bob Valentine was an extraordinary Dan McCormick signing at the beginning of the 1977 season. Bob was coming to the end of a long and accomplished career in Britain, but had suffered an unfortunate broken ankle during the previous year. Birmingham had written off his chances of recovery and it was McCormick and Cradley that gave the experienced Aussie the chance to prove himself one more time. 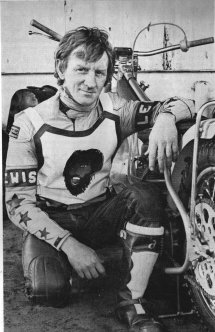 And so it was that 'Bluey' Valentine made it to Dudley Wood in the very unusual position of reserve. He had previously spent a large chunk of his career at Sheffield where he had been a recognised heatleader. It was with no surprises however, that he soon made it into the team proper and quickly put together a string of good scores. McCormick would introduce him on the parade as his 'Ace in the Hole', and gradually Bob carved his way up from reserve to second string to heatleader.

By the end of a turbulent '77 season for the club, Valentine was riding at number one, following the loss of both Bernie Persson and Anders Michanek through too many overseas commitments.
Still, he had always stated that the year would be his last in the sport, and so it proved. He professed, in the end of season farewells, to have loved his time at Dudley Wood and wished he had become a Heathen much earlier in his career. But he did enough to make many friends in the Black Country and won many admirers along the way.
He made a mockery of his four and a half point starting average and improved it by over two points per match.

Bob is still currently living in New South Wales, Australia. He stuck to his promise of retiring at the end of that 1977 season and moved to the Newcastle area of the state, with his wife and family. He is pictured below (right) with another former Heathen, Howard Cole, in 1999. Photo by Steve Magro. 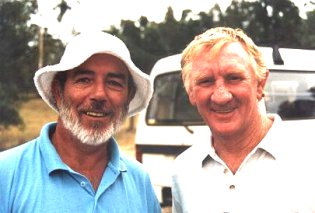