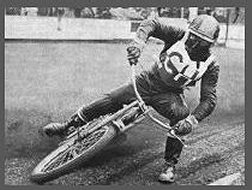 Profile...
Chris began riding on the grasstrack circuits around the West Country as a teenager, he started speedway in the second halves at Exeter in 1959, he also practiced at St Austell which is where Promotor/Rider Trevor Redmond spotted him and found him a place in the Bristol team for the birth of the Provincial League in 1960. 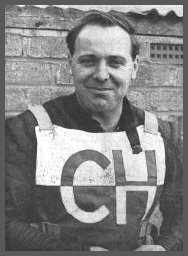 He averaged around 5.60 for his 8 or so matches at the Knowle Stadium, when Bristol closed he moved on to Pennycross Stadium at Plymouth it was here that Chris developed his well known 'ruthless' style of riding that he became well known for.
Plymouth closed in 1962 and Chris moved to St Austell, he quickly became the Gulls number one and had his best season.  Until at the end of 1963 - yes, it closed!
Strange lad this, although born and bred a Cornishman he decided to join Trevor Redmond at Glasgow for 1964!  A 500 mile trip for home matches was just too much even for Chris and he asked for a transfer at the end of the season.
He joined Cradley as a 28 year old but with the strengthened teams in the British League in '65 he never hit top form.  1966 was a particularly bad season for the Heathens but Chris was an ever present and increased his average by one and half points too.  He scored his first full maximum on the 7th May against Belle Vue and briefly held the Silver Sash by beating Tommy Sweetman in July.  He continued to improve through 1967 with a another couple of maximums and even beat the legendary Ove Fundin twice!
Chris continued his ruthless racing throughout 1968 in a stronger looking Heathens side.  Cradley fans were disappointed when Rider Control allocated Chris to Newport in 1969 and he moved back to Exeter in the 70's then like many others tried his hand in the second division with Mildenhall in 1975/6 then to Weymouth in 1977 when Chris finally hung up his leathers after 9 matches.
Chris was one of the REAL characters of speedway he would often 'skittle' all the riders including his own team mates in his 'take no prisoners' style, he even admitted  upsetting some of his team mates but his 16 stone burly body made him a great favourite with the fans, well the 'home fans anyway'!

thanks to Peter Foster for help with research