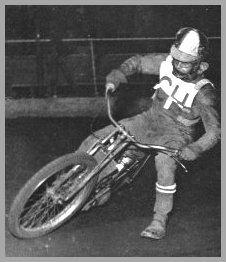 Eric Hockaday will surely be remembered by the Dudley Wood faithful for the routine of lining up at the start-line, touching the peak of his helmet, and then somehow flying from the gate just as quick as the tapes had gone up. He had two good seasons with the Heathens plus two more where he was always on hand to deputise for missing or injured team members.

He quietly went about his speedway career, beginning in the early 50s when he financed his racing through performances with the "Hells Angels" motorcycle stunt team. He made his big breakthrough in the 1960 Provincial league-winning season with Rayleigh and then captained Exeter in '61 for the Falcons' first season back after a four-year absence. After 14 matches and a new Country Ground track record, he went on to enjoy a couple of seasons with Stoke, before arriving at the Wood at the end of 1963.

Eric settled into the third heatleader role with Ivor Brown leading the team, and quickly established himself with a string of good scores. When Ivor was injured later in the year, it was Hockaday that stepped up and produced some dazzling displays to lead Cradley through to the end of that season. One of his best remembered performances was a 13 point tally at Sheffield in 1965, when he surprised everyone from his number two berth. After an opening heat third place, he scorched to an unbeatable four consecutive wins, including the only defeat of Tigers' skipper Jack Kitchen.

An injury in 1965 set him back though and he never fully returned to his best form afterwards. He played a vital second string role for the rest of the season and started in the team for 1966, but in April he was transferred to Sheffield. He chipped in with an average of around 5.50 for the rest of the season at Owlerton. Then in 1967 the move was reversed with Hockaday making the switch back to Dudley Wood after just eight appearances. His final spell with the Heathens only lasted a further two weeks with five points in five matches. He retired after a short spell with Long Eaton in 1969.