Profile...
information provided for the web site by Wayne Peacock:

Joe was Born and lived in Colley Gate just a mile from Dudley wood stadium. He first saw speedway as an 11 year old in 1947. When Cradley first opened at 13 he was the youngest cycle speedway rider in the Black Country league when he rode for Cradley in 1949. After the Heathens had closed for several years and then re-opened, Joe went down to watch a pre-season practice in 1961 were he bumped into former cycle speedway friend Alan Totney who said he was about to buy a bike and have a go. Joe and Alan soon got the hang of sliding the machine on a field close to Alan's in Quarry Bank. His first race at the Wood came half way through that season when promoter Maurice Jephcott said he intended putting on a special race for raw novices during the interval of the meeting. Alan by then a regular second halfer offered Joe the loan of his bike for the race. Joe won it by half a lap and was immediately given two second half rides that same evening against established team men. Although finishing well behind in each race he did enough to ensure getting regular second half rides for the rest of the season.

1962 saw him handed the number seven race jacket after beating an out of form George Bewley in a pre-match run off. He made his debut the following week in an away fixture at Meadow Bank stadium, Edinburgh. He was a member of the Heathens team when they won the Dudley-Wolves trophy and knockout cup in the Provincial League At the time he was working for the then British Motor Corporation at Longbridge, and after having to lose a lot of time to ride in midweek away meetings, he was warned by his foreman he had to choose between his job and speedway, so at the beginning of the 1964 season he decided to pull out of the sport. In 1967 he set up in business as West Midlands Industrial Cleaners, also working as a part time postman for Royal Mail where he worked for 34 years delivering in the Belbroughton area.

He was very well respected in the village where he worked and was given a great send off.

Joe said he was looking forward to his retirement but would still continue to get up early.  Old habits die hard! 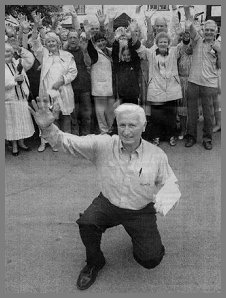 Back to the Listing
Web site created and maintained by Steve Johnson & Phil Johnson. E-mail me your comments and suggestions.
The views expressed are those of the author and not necessarily those of Cradley Heath Speedway.
Copyright: Steve & Phil Johnson, 2006.