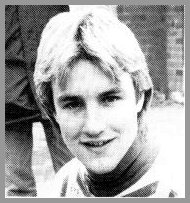 ts a strange Cradley career record possessed by grasstracker John Bostin. Promoted eventually from the 80s British Junior League team, but famed more for his exploits on the grass circuits, Bostin rode just one complete season in 1989. Most of that year was spent at reserve alongside a young American learning his trade in Britain, by the name of Greg Hancock. Aside from that season, JB seemed to make one senior appearance per season to make sure he wasn't forgotten!

Bostin's first appearance above the junior team was little remembered in 1985, when he rode in a weakened team for a challenge match against Sheffield. His next was the following year, and was his first official match in a league encounter at Reading. He left it late in '87, but finally appeared again replacing Paul Fry for the last match of the season on the 4th November at Ipswich. 1988 offered no more chances on the shale, but John's big break finally came in 1989 as a winter replacement for Wayne Garratt, who had struggled to make the grade.

It was to be his one and only full season, but he performed as well as anyone could have expected with some fine performances at the bottom end of the Heathens line-up. Changes were brought in after the first averages in May, when either Bostin or Walker knew they would be making way for the introduction of Hancock. Bostin edged it and maintained his place for the year.

After plugging away with relatively low scores for most of the season, his finest hour came on a rain-soaked evening at Odsal when the Heathens were very much the underdogs to take the points against home side Bradford. Incredibly, JB rose to the occasion to rattle up 12 points - his biggest score for the club. In securing a famous 46-43 victory, he romped home to win heats 12, 13 AND 14!!
After 1989, he did return once more to fill a Cradley spot in a challenge 4TT at Kings Lynn, but he didn't make any further official appearances. No doubt though, he did enough to claim his place in modern Heathens folklore!