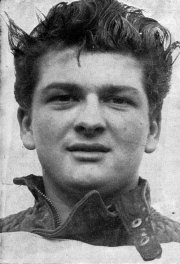 Mike Wilmore stepped into the Cradley team in 1961 after barely being given time to learn his trade as a speedway rider. A friend of then Heathens rider George Bewley, Wilmore initially came to the sport as a mechanic for his pal, but before long found himself pulling on a race-jacket!

Wilmore had started out like many as a Grass Track rider, but at 21, while acting as mechanic for Bewley, he was encouraged to try his luck on the speedway track. By early May of that year, he was adjusting well to the sport and featured in the second half events at Dudley Wood. However, an unprecedented crop of injuries forced Cradley promoter Morris Jephcott into little alternative than to call upon his services. Where better to start than a two-day home and away league double against arch-rivals Wolves!? Mike scored a point in each match before adding another third place in his third and final match against Stoke the final week.

On returning to the second half events, his first team experience stood him in good stead and he shone against his contemporaries. His brief stint was short-lived and yet enough to earn fine praise from various quarters, indeed being tagged at one stage as one of the brightest finds of the Provincial League that season. Despite the big impression however, he didn't turn out for the Heathens again, leaving him a record of three points from three matches, but some fine column inches to boot.