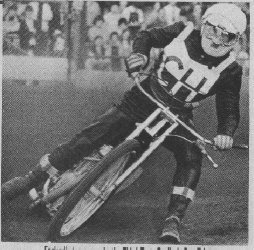 Roy Trigg started out on his speedway career firstly at the Rye House training school and then in second-half races at Aldershot and New Cross. Before long he was snapped up by Wimbledon, but struggled a little and was loaned out to Poole where he began to make significant progress. Still aged just 18 he returned briefly to the Dons and then on to Hackney where he found heatleader status alongside Colin Pratt.

Before embarking on his racing career, he was a member of the Raynes Park "Tigers" Cycle Speedway team. He also spent some time as mechanic for "Speedy" Pete Jarman. 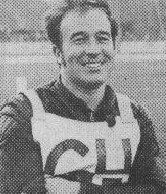 It was in 1968 when he joined the Heathens, after being allocated to Dudley Wood by the rider control committee - the same committee who had steered him to Oxford the previous year. But it was with Cradley where Roy enjoyed the most successful era of his racing, including time as skipper. He maintained a heatleader role for the best part of all his five seasons at the Wood and formed a formidable partnership with Bob Andrews. With Bob on the white line and Triggy round the boards the two complimented each other perfectly.

Among the tales and memories from Roy Trigg's time with the Heathens, one of the most bizarre stories is 'the Gary Middleton incident'. After a clash on-track between the two, Triggy famously found himself looking down the wrong end of the barrel of a gun - pulled from the toolbox of Middleton!

Internationally, Roy represented England both home and abroad in Australia, and by 1970 had become an automatic choice on the Lions team sheet. Individually, he was never a World finalist but certainly made some memories while battling the qualifying rounds along the way, and he ruffled a few feathers on more than one occasion. The most significant was the 1970 British Final at West Ham where he eventually finished in a highly creditable third place. Despite good form with the Heathens, he wasn't expected to score many points, but the wide open Custom House circuit perfectly suited Triggy's 'round the boards' style and he scorched to 12 points and a rostrum finish.

After leaving Cradley, Roy spent two years at Newport before retiring and emigrating to New Zealand where he still lives today.

Update...
In 2013 Roy was aged 70 and still working! He works full time for Auckland Council maintaining childrens playgrounds. In his spare time he loves kayaking and watching his grandchildren play rugby and netball. Also Roy and his wife Trace have bought a campervan and are hoping to tour New Zealand a lot more in the next few years. He lives about ten minutes away from former Heathen Bob Andrews and former Wolf Tommy Sweetman and catch up regularly he also still follows speedway in Speedway Star magazine.