[Statistics taken from the Cradley Speedway Database including all meetings] 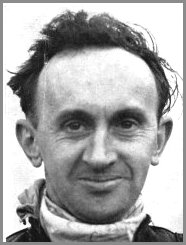 Another product from the Rye House training school he made his debut in the Southern Area League in 1956 for both Rye House and California but became a regular performer at Hoddesdon in 1957. When the club didn't operate in 1958 Ronnie had some outings with Ipswich for their National Trophy matches.
He wintered in Venezuela in 1959 / 60 before getting his big break with the heathens when the Provincial League started in 1960.

Ronnie was Cradley's first captain in the Provincial League, he regularly scored around eight points per meeting throughout 1960 with his first maximum coming in a Challenge match against East Anglia in July.  A little overshadowed by Eric Eadon and Harry Bastable later in the season but earned a place in the Heathens side for 1961.
1961 saw Ronnie start to struggle a little with the track at Dudley Wood and after just nine meetings he was transferred to Sheffield.

He regained his form with the Tigers at Sheffield and stayed with them for the rest of 1961 and into 1962.  In 1963 Ronnie decided to move nearer to his London home but the move didn't work out and he retired in July.