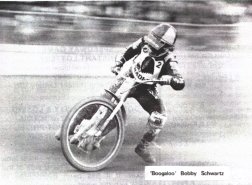 It is hard to believe that 'Boogaloo' rode only one season for Cradley, before being released under the points limit. He came with a sparkling reputation as one of America's brightest young stars, and that was enhanced by the recommendation by none other than Bruce Penhall.

He was introduced to Speedway by the boss of his local bike shop, ex-rider Sonny Nutter. His father bought him a Jawa bike for his 17th birthday and he was soon progressing around the Irwindale Raceway in California. It took a few years before he was persuaded to come to England though, despite approaches from John Berry at Ipswich. 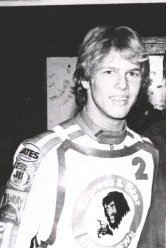 When he finally came to Cradley after already reaching the Inter-continental final in the UK, Schwartz progressed from novice British league reserve to an out and out heatleader who was regularly competing with and beating the very best. It was all no surprise though, after he scorched to 11 points from 4 rides in his Dudley Wood debut meeting. There followed a fantastic partnership with his friend, Penhall, as the two knew each others track style almost as well as they knew their own.

The phenomenal debut season encompassed Cradley's best league finish to date (3rd) as well as the Knock Out Cup and Inter-league Cup. As a pair, Penhall and Schwartz formed one of the most exciting and glamourous partnerships in the league and took the honours in numerous Best Pairs tournaments. Individually, Bobby achieved an average not far short of 8.00 and capped the year with victory in the fiercely contested prestigious Golden Hammer meeting. 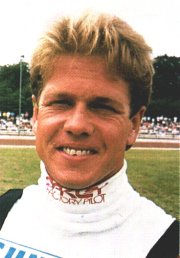 Theres no stopping this man, and Boogaloo has continued to ride in the US throughout the 80s and 90s. He has regularly competed in the American National Championships and still matches the best of the Yanks on the tiny Californian circuits.