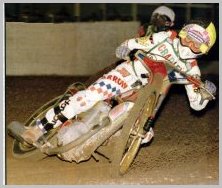 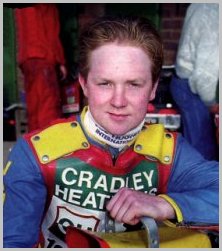 Scott was brought to Cradley by Colin Pratt as a junior from the successful Belle Vue Colts side, after beginning his Speedway career as mascot for his home team Sheffield.

He spent five years at Dudley Wood, progressing from reserve to second-string and lining up at every riding number, except heatleader. Known affectionately by the fans as Scud, so-called apparently because once he shot from the gate you never knew where on the first bend he would land! An all-action style brought Scott his share of plaudits & critics, but also injuries.
"Cradley was somewhere I always wanted to ride", says Scott. "It was a dream move for me. There were riders I looked up to like Erik, Bruce and Jan O: the people there were absolutely brilliant".
Scott says winning the British Under 21 title as a Cradley rider was one of the highlights of his career.  On a memorable night at Long Eaton in 1992 'Scud' got the better of future GP stars Joe Screen and Mark Loram to pull off a stunning win. "I'd never previously ridden in a meeting as prestigious as that", says Scott "I was in heat one, from gate four against Mark Loram, and I got a rocket start. I won in one of the fastest times of the night and went back to the pits feeling fast, confident, and suddenly thinking I could win it. "I was wearing my Cradley race-jacket, which meant a lot, there were lots of Cradley fans sponsors and family. It was a tremendous meeting to win and it goes in the history books forever".
From making his senior debut in 1990 to the full time Heathens spot in 1991, Scott then followed his Under 21 title with a move from reserve into the top five in May 1993. Some of his best scores in Cradley colours followed with 14+1 against Belle Vue in the KO Cup and then 15 against Wolves in early June.  A string of further double figure scores underlined his growing potential but the year ended with a broken collarbone
At the end of 1995 when Cradley were forced out of Dudley Wood, Scott was pencilled into the team which was to ride at Stoke in 1996. However a change of heart from the management left him unexpectedly on the sidelines, bringing his time with the club to an end. He describes the news as heart wrenching' but as one door closed another opened with a phenomenal move to hometown Sheffield.
After leaving Cradley, Scott won two Premier League titles and various other trophies as a heatleader with the Tigers. Along the way, he earned a contract to ride in Poland and made two British Final appearances. Further spells with Berwick, in particular, along with Exeter, Workington and more tha one return to Sheffield prolonged his career to 2009.


Now despite turning 40 this year Scott insists he never technically retired from racing! Instead he has been involved for a couple of years helping former Sheffield team-mate and family friend Hugh Skidmore and he looks set to remain trackside with 16 year old son Brandon begining to try his hand at speedway.
Scott still lives on the edge of Sheffield and is married to Black Country girl Catherine.  He has three sons: Josh, Brandon and six month old Brady. Involved from a young age in the antique and jewellery trade through his parents, he started his own business in 2003, which is going well ten years on.
He retains a keen, accurate recollection of his entire speedway career and there is certainly a lingering love for the sport and notably for Cradley Heath. "I have all my Cradley race-jackets and the last couple still have the shale on them from the Dudley Wood track," says Scott. "I can pick one of them up, take one smell and fell like I'm back in the pits.
My time there was tremendous and Cradley will always be a part of me." <!--Footer--!>
Back to the Listing
Web site created and maintained by Steve & Phil Johnson. E-mail me your comments and suggestions.
The views expressed are those of the author and not necessarily those of Cradley Heath Speedway.
Copyright: Steve Johnson & Cradley Heath Speedway Ltd, 2013