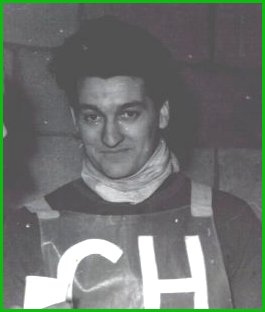 Brian Shepherd made his mark in Heathens colours as partner to Eric Boothroyd in 1950, after both riders had been transferred together from Tamworth by promoter Les Marshall. He went on to ride for three seasons, before the track closed at the end of 1952.

Brian's involvement with speedway began when he was mechanic to elder brother Dick who rode for Plymouth in 1947, and later for Hull and Walthamstow. When he took up riding himself, he soon managed a series of second half races at Rayleigh. But after initial progress, Rayleigh closed down, and he had to impress all over again with trials at Tamworth. Promoter Les Marshall signed him up and it was then that the partnership with Boothroyd was formed.

When Eric moved on to Birmingham during the Winter of 1950/51, Brian continued his good form with a solid start to the new season. Unfortunately, he suffered a badly fractured leg after just ten matches and was out for the rest of the season. He was back in 1952 though and managed to pick up where he left off. Further progress saw him achieve second place in the Cradley averages that year, behind only skipper Harry Bastable.

When Cradley closed in 1952, Shepherd moved to Wolverhampton, but lasted just one season before deciding to retire. His career average with Cradley reflects a steady improvement with regular solid scoring throughout three seasons with the Heathens. Furthermore, the points were backed up with an enjoyable all-action riding style which never failed to give full value for money.