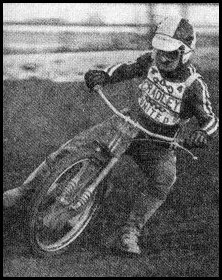 Sandor was bought out of retirement in 1974 by manager Harry Bastable to replace Dave Younghusband.  He was a late starter, in more ways than one late on in his career and late on in the season, it was June 15th against Hackney when he rode his first match for the Heathens.  More steady than sensational but by August he had scored his first maximum, against Hull.
This turned out to be his best score for the team but Sandor was a match winner on more than one occasion.  He was more inconsistent on away tracks but was a firm favourite with Heathens fans, partly because of his 'hard riding style', he endeared himself to the Cradley faithful who defended him many times on the terraces of Dudley Wood.

He broke his collar-bone in August 1975 in the first heat against Newport and three weeks later after two rides and no points decided to hang up his leathers for good and concentrate on his garage business.  He bought a garage in Sheffield doing car repairs and at one stage had 53 hire cars on the road.

Sandor was a great character - one of the sports best in fact and not just to speedway either, he was an ex Hungarian freedom fighter who made his way from Debrecen on foot to the nearest Western border at Hegyeshalom some 250 miles. Then made his way to Skegness in the UK. He rarely spoke about his ordeal though.
In Hungary he was an all round motorcyclist winning his first of seven Hungarian titles at sixteen years old in the 250cc class, he was also Hungarian scrambles champion in 1953.  He won his last championship in Hungary in 1956 just before fleeing the country. 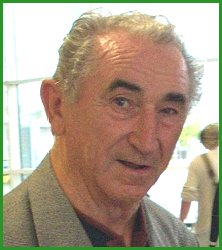 Sandor sold his garage  business in Sheffield in 1989 and went back to his native Hungary running a small bar in the village of Bodaszolo near to where he was born.

Sandor sadly passed away on 11th October 2009.  He will be sadly missed by his son Sandor and daugters Sarah and Irisz
His memories will live on among speedway fans.
Rest in peace Sandor.