Steve Lawson is best remembered in speedway circles as a Glasgow rider, and quite rightly so after giving them solid service throughout the 1980s. However, it's Cradley that the man himself refers to as his 'favourite other club'.

He started out in the Cycle Speedway ranks, but when his father bought him his first JAP speedway bike, aged 15, he went along to home-town Workington for after-meeting rides. His first match in 1971 was against Bradford, he scored one point, won the second half reserves race, but the next week was replaced by Kym Amundson. 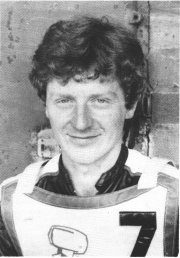 His big impression on the National League came in 1974, but after only a couple of seasons his obvious talent took him up to the British League with Belle Vue. It was only a short spell with the Aces too though before he landed in the Glasgow setup in 1978, quickly establishing himself as a reliable high scorer with the second division Tigers. There was one loan spell with Birmingham in 1979 before Dan McCormick snapped him up to fill one of the Heathens reserve slots midway through the following year.

Lawson made a dream debut on his return to the top division with a three-ride paid maximum against Wolves in August 1980. He was then drafted into the team as temporary cover for Bruce Penhall, initially just for a home and away challenge against Birmingham. With 10+1 from four rides at Dudley Wood, followed by another 7 pts in the evening on his former track, it was no surprise that the 23 year old was eventually called upon on another ten occasions during that year. His last appearance, to round off the mutually successful stint, was part of the KO Cup Final defeat of Belle Vue.

Still a Glasgow rider, Steve was not to be fitted into the Cradley team in 1981 and returned to National League action with the Tigers. The links forged at Dudley Wood were enough however to see him return once more in 1982. Signed on a month loan as cover for the injured Lance King, he took in five matches including a League Cup Final and a Knock Out Cup Semi-Final, eventually tallying a further 16 points to top up his Heathens total.

He went on to captain the Glasgow team for over a decade until his retirement at the end of 1992. During that time, he broke all sorts of club records including most appearances, most points and longest career!

Despite completing only 16 matches in total for Cradley over his two spells with the Heathens, Lawson chipped in with some useful contributions at vital times of the year. The club also made an impression on the rider, judging by his comment that "The experience [at Cradley] still sticks in the mind. The quality of riding in a team with Bruce Penhall was unreal and he treated me as though he had known me all my life, he was a bit special and so were Cradley Heath".

I think Steve still lives on a dairy farm in Maryland, only about eight miles from Workington's Derwent Park track.