Dudley Wood & The Search for Re-Location

The first public indication that the future of Dudley Wood stadium was in doubt came at the end of the 1994 Speedway season. The site, which had been home to the Cradley Heathens Speedway club for almost fifty years, was said to be "no longer viable" by the owners, former Speedway promoter Derek Pugh and the Bridgewater family, who had inherited the land from their father. However, a new consortium was formed on behalf of the club and negotiations led to a stay of execution in which the team raced for one more season in 1995. During this time and the following years, many alternatives were looked at, including new venues, existing stadiums and even a temporary track share with arch-rivals Wolves. Unfortunately, none were viable.

The Heathens were forced to spend the 1996 season racing 'home' matches fifty miles away at Stoke, as it emerged that a deal had been concluded to sell the Dudley Wood site to house builders Barratts. In April of that year, Dudley Council unanimously voted to reject the planning application by the company to build 121 homes on the site. Heathens fans had meanwhile mounted a massive campaign which gathered over 33,000 names on a petition presented to the council.

The row continued and went to a public inquiry, in April 1997. Once again, a revised application from Barratts was rejected, this time by an independent Government inspector. In the mean time, proposed moves such as a land-swop arrangement and a compulsory purchase order all fell through with the owners vowing that Speedway would never return. 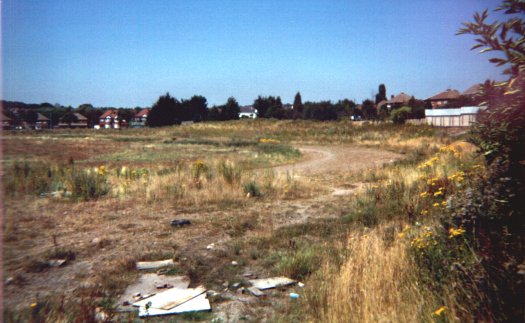 The site was advertised for sale on the open market in the Spring of 1998, but bids from the Speedway club, a major leisure company and two other unnamed companies were all turned down by the owners in a move which had a strange feeling of inevitability about it. In the period that followed, a local Unitary Development Plan (UDP) review by Dudley Council promised to make the site less susceptible to residential development, but despite an overwhelming level of correspondence from speedway supporters, the review amendments were to be in vain.

Barratts submitted third and fourth versions of their planning application, each with very little revision and both were to be rejected by the council. Again, the company pursued their proposal through an appeal, resulting in a second public inquiry in 2001. There had been very little changes in the case for either side, but against all public opinion, the Government inspector this time ruled in favour of the landowners and builders. Harshly, there were no means of appeal for the council or the speedway club and its fans, and Barratts were granted their long-awaited permission to begin building on the former Dudley Wood stadium in January 2002.

When it was deemed by campaigners that all possible avenues had been exhausted in the fight to overturn the final decision on Dudley Wood, attention was turned whole-heartedly to the ongoing search for a new site in the local area. Since a list of possibilities were ruled out in the early stages of 1995/6, this side to the battle had been very much in the background. It now became the main focus. Publicly, stadiums, sites and pockets of land were thrown around in the local press by various parties, some ranging from the unlikely to the impossible in terms of housing a full-size speedway track and spectators. Privately, both potential stadium developers and a gradually re-organising supporters campaign group have continued to pursue a variety of options.

Multi-track promoter and Kidderminster businessman Tony Mole had, in the mean time, emerged as one of the main parties seeking to bring back the Heathens. His interest remains, while existing club directors have retained the rights to promote Cradley Heath speedway at a suitable venue in the local area. There are indeed other parties also with apparently serious intentions of re-locating the club. The outstanding problem has been an alternative site in one of the most built-up areas of the country. Neighbouring local councils have spoken out in virtually unanimous support of the club, but the powers that be have not produced any practical solutions to the problem.