The Black Country derby matches between Cradley and Wolves are arguably the most fierce and competitive in the sport of Speedway. With literally just a few miles between the two clubs, the conflict is inevitable with each and every meeting between the two providing both entertaining racing on track and a healthy supporters' banter on the terraces. As a Heathens fan, the greatest thrill in Speedway is watching a hard fought victory at Monmore Green, home of the Wolves. The competition between these two local rivals stretches back a long way and there have been countless exciting clashes that have gone either way time and time again . If the league and cup encounters over the years were not enough, then the annual Dudley-Wolves trophy was always an added bonus to take in. A special head to head between only these two teams may just have been a two-leg challenge match to the uninitiated. But for the locals, the pride of the Black Country was at stake and the matches certainly couldn't be described as 'friendly'! 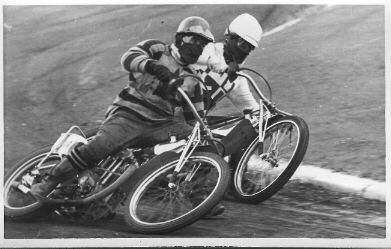 This rivalry goes back a long way! Can you name these two riders battling into the bend? 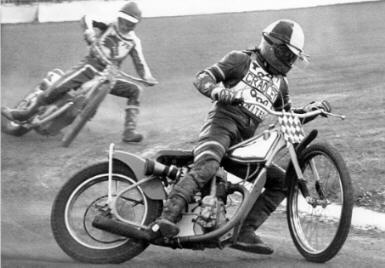 The titanic clashes between these historic Speedway giants have thankfully been allowed to continue, despite Cradley's current track problems. In both 1997 and 1999, Wolves promoter Chris Van Straaten organised challenge matches to compete for the Tom Johnson Memorial Trophy - remembering the journalist who covered the sport on both sides of the Midlands.
Unfortunately, on both occasions, the home team have prevailed - but more importantly each date has seen an enormous turn out of Heathens supporters, past and present. The atmosphere has been as good as it ever was and the racing has been of a standard worthy of the billing.
The Cradley team has been represented in both matches by Billy Hamill, Peter Nahlin, Les Collins. In '97 they were joined by Greg Hancock, Troy Pratt & Scott Smith and in '99 by Gert Handberg (flown in specially), Grant McDonald, David Walsh & Mark Loram (guesting for the injured Hancock).