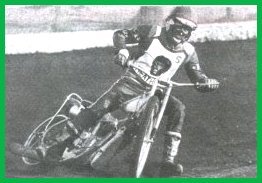 Profile...
Anders Michanek was signed by Dan McCormick for Cradley in April of the 1977 season to cause one of the biggest transfer shocks in the club's history to that point. He was a replacement for the Leicester-bound John Boulger, but the complications which arose with the signing itself proved to be nothing in comparison to the disruption that ensued during the first half of the season. 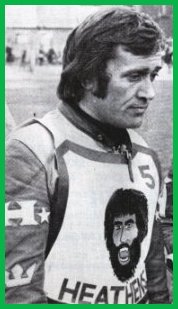 Anders already boasted the finest of Speedway pedigrees. He had arrived in Britain in 1967 to ride for Long Eaton and notched an impressive 8.74 average from 31 matches. He moved on to Leicester where he pushed his average further, to more than 10.00 - a figure that he would not drop below again during his racing in the British league. He didn't return in 1969, but was back again in '70 for a season with Newcastle, before being transferred to Reading in '71. He stayed with the Racers for five years (missing 1974) and took his average to over 11.00 in two of the seasons. During this time he achieved the ultimate accolade by scorching to an untouchable 15 point maximum in the 1974 World Final at Gothenburg.

After again sitting out a British season, Cradley were ready to persuade Mich to return and convinced the classy performer that his future was at Dudley Wood. The transfer wrangle with Johnny Boulger had left the Heathens in search of a quality Number 1 to support Bernie Persson, but no-one could have expected who was to arrive. Just when the move became public though, Mich's parent club, Reading, demanded a £12,000 (ukp) fee for his services. The signing had previously been negotiated with the approval of the BSPA and the Racers promoter, upon the condition that the embargo would be lifted on JB's move to Leicester. Cradley had offered the Berkshire club only a £2,000 (ukp) "goodwill" fee, for them to waive their first option of Michanek's services and the situation was inevitably forced into BSPA arbitration.

Anders eventually signed and scored a modest seven points on his home debut for the club. Chris Van Straaten, then Speedway manager at Dudley Wood, allegedly sat by the phone all week waiting for the Swede to call, and was mightily relieved to eventually see the rider draw up outside the stadium in a shining white Mercedes. After officially putting pen to paper, the new star was whisked off for an interview with Tony Butler on the local BRMB radio station, before looking over his brand new Weslake bike.
The new top two of Persson and Michanek was an instant hit, with the former World Champ clocking up some phenomenal scores including a 20 point haul at Swindon in the league. Unfortunately, he was missing matches though. Despite the club trying desperately to work around his existing foreign commitments and prior bookings, Rider Replacement was an all too familiar phrase in the Cradley scorechart.

Things finally came to a head in July, when Anders missed a Midland Cup match at Leicester without notification or explanation. The management were in uproar, the media in a frenzy and the supporters just waiting to see what would happen next. The outcome was almost inevitable though; Mich left the club, making his final appearance in the Golden Hammer at the end of the month and returning to stay in Sweden. Later in the year, he was to break his foot which led to a lengthy lay-off and a fatal blow to his World Championship dreams.

It was a short stay with the club, but Anders Michanek used the time to show exactly what sort of mastery he was capable of. He was already a multi-World finalist and was a very rare occurrence of Cradley signing such an established big name who was still very much on top of his game.

Interestingly, as a teenager, Michanek spent three years as a competitive ski jumper in his home country, and in his later years went on to control a successful haulage business whilst still riding Speedway. He also briefly returned to British Speedway in 1979 for a spell with Ipswich.

Throughout the 90s, Anders has been a regular performer in Barry Briggs' Golden Greats events. Along with the likes of Briggs, Peter Collins, Jiri Stancl and Ivan Mauger, Mich has continued to be one of the stars of the meetings held in Britain and abroad.