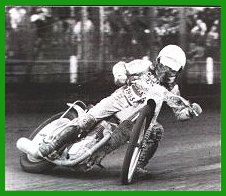 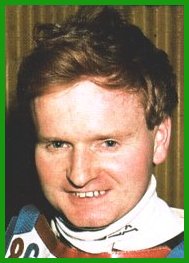 Profile...
Andy followed in the tyre-tracks of his older brother Alan riding second-half events at Birmingham in 1976.  In 1978 he was loaned out to Milton Keynes where he reached an average of over 6 points per match in the National League.  He really came good in 1979 though, doubling up with the Brummies in the British League he became the first and only rider to compete in both the NL Riders Final (as Milton Keynes number one) and also in the British League Riders Final as Birmingham's number one!

He spent the next four years with the Brummies, 1980 as third heat-leader and from then on, second only to Hans Nielsen.  Highlight of his career was when he won the British Final, with brother Alan second in 1982.  He went all the way to the World Final too, in Los Angeles but only as reserve and never got a ride.
When Perry Barr closed at the end of 1983 Andy went to Wolverhampton for one year, then joined Hans again at Oxford in 1985 where he won a League Championship medal.  He stayed with the Cheetahs in 1986/7 then moved back to Wolverhampton to make way for Martin Dugard at Oxford.  He never settled at Wolves and had his worst season before going back to Oxford in 1989.  In 1990 he decided to try his hand back in the National League with Wimbledon, he became an instant star - topping the Don's averages and scoring six maximums, winning the Spring Classic and rounding off the season with the National League Riders Championship.  Due to the amalgamation of the leagues in 1991 he found himself back amongst the top boys, he took it in his stride even when Wimbledon closed mid season and moved to Eastbourne he finished with an average of over 9 points per match.  However he made way for Bobby Schwartz in 1992 and joined Cradley in June who were in trouble with injuries to Billy Hamill & Jan O Pedersen.

Andy always went well at Cradley but somehow never recaptured his old form from Eastbourne nevertheless he averaged over six but picked up a collar-bone fracture against Reading in October which ended his season.
1993 saw him link up with brother Alan at Dudley Wood but both riders had bad seasons with Alan leaving in June.  It looked brighter for Andy in 1994 but it didn't last after just four meetings he crashed in the World Championship Round at Exeter and was replaced with Peter Nahlin.  There was no room for Andy when he was fit so he went back to Wolves but retired at the end of the season.