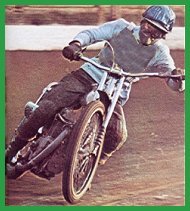 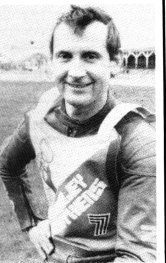 Arnold Haley is best remembered in speedway circles as a Sheffield rider, and remembered specifically by Tigers fans as one of their most popular heroes ever. He was at Owlerton from 1965 to 1978, spending the majority of those years as a heatleader and clocking up nearly 3000 league points. He was World Final reserve in 1968 and called upon for England international appearances.

As he neared the twilight of his career, injuries and mechanical problems began to hamper his scoring potential, and Haley embarked on a succession of moves, beginning with a switch to Belle Vue in 1979. The following year, he rode in around twenty matches for Exeter before his contract was terminated when he failed to turn up for a home meeting. He had a short spell with Edinburgh during the remainder of the season.

It was almost as a veteran when Arnie finally became part of the Dudley Wood setup, in the highly successful 1981 season. Aged 38, he was signed by Peter Adams to fill the second reserve slot at the start of the season. By conincidence, his debut was against former club Sheffield, but his halcyon days were over. He failed to score from two rides and only rode in a further eight matches for the Heathens. His best score was two points against another former club, Belle Vue at Hyde Road. He was released at the end of April, when Adams brought in Aussie John McNeill as a permanent replacement.

It was all in stark contrast to the three occasions when Haley had guested for Cradley, while still at his best form with Sheffield. In 1970, he scored 10 points for us against West Ham, and his two appearances in 1973 yielded a total of 22 points, when the team was missing Bernie Persson.

After the official spell at Dudley Wood in 1981, Arnie tried his hand at Oxford in the National League for a while but eventually retired to end his near 20 year career.

We are extremely sad to report the death of Arnold Haley, one of speedway's great characters. Arnie passed away in hospital on Friday 28th March 2003 after a fall at home. A former England International and World Final reserve, he joined Cradley in the twilight of his career but is best remembered as a Sheffield Tigers Legend from the 60s and 70s. Our sympathies are with all the family and friends he leaves behind.