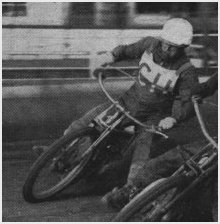 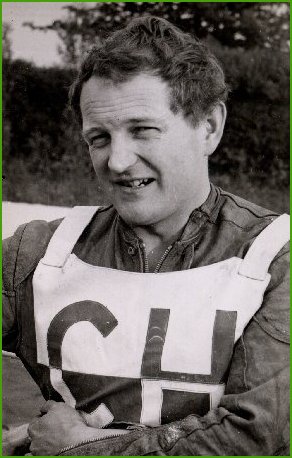 Alan really was the local lad that made good, he started as a track raker at Dudley Wood in 1952, he was also a cycle speedway rider.
When Dudley Wood first closed it's doors in 1952 Alan was called up for his army duty and spent two years in North Africa, while he was out there he got involved in trials riding and that's where his love of motorcycles began.  When he came back he bought himself a trials bike and did some scrambling locally.
When Cradley re-opened he went along to Dudley Wood to see if it was as good as he remembered, it was, and he was quickly hooked, he bought himself a speedway bike and asked for some second half rides, in fact Alan didn't have transport in those days and had to push his bike to the track!
Alan's first race win was against Pat Flanaghan in a match race in April 1961, it was the breakthrough Alan wanted and was pencilled in at reserve at Middlesborough on 20th April 1961, he scored two points.  He broke a finger and a collar-bone that year which limited his progress.  He was a late starter in 1962 it was the 12th May when he broke into the team and rode 29 meetings in all and scoring 77 points plus 18 bonus points.
It was April 13th 1963 when Alan went home with a full pay packet 11 paid 12 against Stoke, he did it again two weeks later against Long Eaton.  He never did get that magical maximum but he was always a steady scorer

Alan broke a couple of ribs in 1964 which kept him out of the saddle for a few weeks but still had more meetings that year than any other in his career.  Although his best year from a points average was in 1965 he was beginning to find it tough against the British League boys and for the next two seasons he found he was spending more and more time in his engineering business and decided to hang up his leathers in 1968.