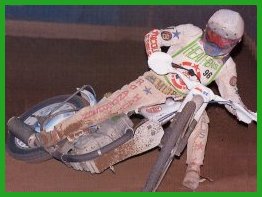 + In addition to such an impressive club career, Les has an impressive international CV to match. In the run-up to that memorable 1982 World Final in Los Angeles, he had sent out a warning to the rest of the field by winning the final qualifying round, the Inter-Continental Final. Before that, he had been crowned British Under-21 Champion in 1977, Division 1 Riders Champion in 1980 and has narrowly missed out on the British Final rostrum with fourth place on three separate occasions.

+ His appearances in the Division 2 Riders Championship have now reached double figures, while he also qualified for the Division 1 Final on five occasions. He made it to two World Long Track Finals and won both the Four Team Tournament and Pairs competitions while with Edinburgh .