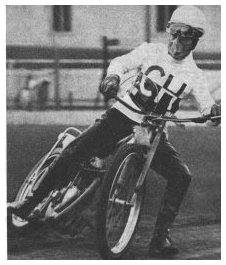 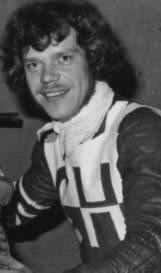 Unlike the great Heathens idols that followed him in the late seventies and early eighties, Bernie had the unenviable job of leading Cradley through some of the tougher times. However, his superb statistical record and accomplished riding style has made sure that this 'Black Country Swede' will always remain in the hearts of the old Dudley Wood faithful.

Already an experienced international, Bernie was allocated to Cradley at the start of 1969 as a replacement for the retiring legend Ivor Brown. He had been brought to Britain four years earlier by Edinburgh and had quickly established himself as a regular heatleader in the formative years of the British League.

His success at Dudley Wood was instant. He began the season by helping the Heathens to home and away victories over Wolves, won the Midland Riders Championship round at Dudley Wood in April and then took first place in the Alan Hunt Memorial Trophy. Unsurprsingly, the season was to finish as our best in the British League at that time. Bernie scored over 300 points despite missing several matches when returning to ride in his native Sweden. Alongside Roy Trigg and Bob Andrews, he helped to form one of the most powerful heatleader trios that Cradley had then tracked.

The success story was to continue for the next four seasons at Dudley Wood as Bernie clocked up season averages consistently well over 9.00 points per match. He was the star; a fans favourite; the jewel in Cradley's crown. Although the team as a whole still struggled to make any impact on the domestic league, we had a rider who excelled on the speedway stage both in England and abroad.

The peak was of course in 1972 when he came closest to bringing the coveted World Individual title to Cradley Heath. Remember this was before the times of Penhall, Gundersen, Hamill and Hancock. Such heights had never before been reached by a rider wearing the old green and white.
In a tough final watched by 80,000 fans, it was the old rivals Ivan Mauger and Ole Olsen who were expected to fight it out for top spot. However, our Bernie had luck on his side and rode through his five heats before taking Mauger to a thrilling run-off. In his first race, he was passed by Olsen but then the Dane fell while challenging for the lead, allowing Bernie to start with a second place. Then in the next, he shot into the first bend alongside another relative favourite Barry Briggs, and the Russian Valeri Gordeev. With all three almost side by side, it was Gordeev who was inevitably squeezed out and then Bernie barged ruthlessly into Briggs while both were struggling to hold onto their machines. Briggs hit the deck and was then hit by Gordeev, eventually having to be taken to hospital to have a finger amputated. Meanwhile, Bernie won the rerun.
Two more heat victories followed, including another slice of fortune when another Russian Alexander Pavlov fell when comfortably in the lead. The dramatic conclusion was ensured when Mauger beat him in heat 19 and the two met for a run-off which went right to the death. The eventual champion took an age to inspect the track and the starting gate but then made the gate to lead all the way. Bernie battled away behind despite being constantly showered with shale from Mauger's back wheel and then produced a last ditch desperate fling to almost catch his opponent on the last bend. It was not to be but it was a meeting to be savoured for the long-serving and long-suffering Heathens fans.

Back on the domestic scene, 1974 saw a ban on all Swedish riders, imposed by the promoters association, and when Bernie was back for the Heathens in 1975, he never quite recaptured his previous outstanding form. He showed improvement at the start of the '76 season but then quit the British season to concentrate solely on the Swedish league. Again he returned in 1977, but his stay was cut short when he missed two consecutive meetings in August and was subsequently sacked by promoter Dan McCormick. Although he made a brief appearance for us against Hull in October, this was to be his last association with Cradley. It was a sad way to end, especially as he was still our top rider at the time. However, it was a long and impressive service that had preceded his departure and this was what would always be very fondly remembered.

In 1979 Bernie returned to Britain to ride for Sheffield, where he was third heatleader behind the Doug Wyer-Reg Wilson partnership and attained an average of just under 7.00

Sadly Bernt passed away on 21st September 2020.  RIP Bernie you were loved by so many Cradley fans, you will always be remembered as our 'STAR' rider of the 70's

Bernt Persson was a Cradley Heath Speedway legend - a little before my time on the terraces but a huge favourite of my Dad’s.

Well aware of his place in Heathens’ history, I felt tremendously privileged to write a piece on his career during my first season of articles for the Cradley race-night programme in 2010. I managed to get hold of a contact number for him in Sweden and somewhat nervously phoned him for a chat.

Before I did so, Dad told me stories from when he was younger, supporting Cradley and idolising Bernie more than any rider. He had even once hand-made a commemorative plaque with a wooden action shot in ‘CH’ race-jacket, Swedish flag and the name ‘BERNT’ next to it, which he presented to him one night at Dudley Wood.

“Ask him if he remembers it,” Dad said to me before I made the phone call for the interview.

“I can’t ask him that. It was about 40 years ago. He’s not going to remember it” I replied.

Still, I couldn’t resist. I phoned Bernie in his native Sweden and we chatted for ages about his time at Cradley as he fondly recollected times on and off the track in the Black Country. Before the end of the call, I plucked up the courage and described the hand-carved ornament that Dad had made.

“I don’t suppose you remember receiving something like that, do you?” I asked meekly.

“What?” I couldn’t quite believe it. “Really? The same one?”

“Yes! I’ve only ever been given one like that. It’s right here in my trophy cabinet! You must thank him but tell him, I need a new letter ‘T’ - it’s fallen off!”

I was gobsmacked but delighted to pass on the news to Dad, who was equally amazed that his handiwork could have even made it back to Scandinavia, let alone still be on display all those decades later.

The article on Bernie was printed in the programme and it was a neat little side-story to go with it. But there was more.

The following year, I had the chance to visit Bernie’s hometown of Eskilstuna in Sweden. On a road trip to take in the Under-19 World Team Cup Final, I found myself staying in a hotel just 15 minutes from where he lived.

When I arrived on a summer’s Friday evening, I gave him a spontaneous call from the hotel lobby and asked if he fancied a visitor. He was more than happy to welcome me and I hopped in a taxi. A quarter of an hour later, I was on the outskirts of town, approaching single-story humble accommodation, wondering if I was in the right place.

Appearing from around the back, Bernie and his dog greeted me. We went inside and spent a few hours sitting at the kitchen table with some cans of beer, chatting again about speedway. He was the nicest guy. He took me into his lounge where a pair of wooden cabinets stretched the length of one wall. They were decorated with some of speedway’s most cherished silverware - trophies, tankards, crystal glass; accolades of Swedish National Champion and World Championship runner-up.

Amongst them all, there in the middle was a hand-carved wooden plaque - that had been treasured for over 40 years - made in the Black Country by my Dad. Sure enough, it was missing a letter ‘T’.

I called Dad as soon as I left Bernie’s place and he was amazed all over again to get a picture of his hero, standing proudly next to that wooden ornament. I kept in touch with Bernie from time to time after that and I shall always cherish the memory of that night in Eskilstuna, drinking cans of beer and chatting fondly about the old days with one of Cradley’s greatest ever stars.