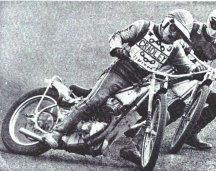 + When Bruce first started speedway in his native New Zealand, his father was one one of the local stars (Kiwi Cribb). He first shared a bike with his Dad and the programme had to be worked out so that they could be kept apart! When he did finally get a bike of his own, the first time they met Bruce shoved him into the fence. Kiwi said when it comes to being knocked off by your own son it's time to pack up and he did!

+ It was on 19th April 1976 at Brandon when Cribby achieved the remarkable feat of taking eight rides in match, and it remains the only occasion that any Cradley rider has ever taken so many outings in one meeting. It occurred partly thanks due to an injury picked up by John Boulger three nights earlier and meant that Bruce was out in heats 3, 5, 7, 8, 10, 11, 12 and 13. Remember, it was only a 13-heat formula so that was all but five races and the last four in succession. The local Express & Star reported that he finished last in his final two races "because his tyre was so worn out"!

Bruce still lives in the Midlands and has stayed involved with the sport though his skills in engine tuning. He has worked for Billy Hamill's joint business venture 'Bullet Enterprises', and was regular on the golf course and even managed to win an open in the past. However he gave up due to a bad hip that has now healed itself from the rest over a ten year period
Bruce has also ran a motorcyle service repair shop until a year ago when he retired, although sometimes still help a BMW endurance car race team.

He is always a regular at Cradley new era at Monmore Green and Perry Barr and attends most social events.