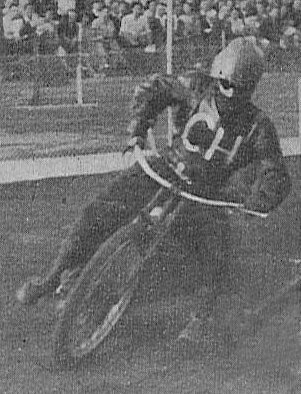 [taken from the Cradley Speedway Riders Database includes all matches]

Frank was the elder brother of Jack Young, he followed his brother after seeing his success with Edinburgh.
After scoring just two points from his first four matches in the South Shield he settled down with six points against Wembley in a Challenge match then his first 'official' meeting against Ashfield in the National Trophy he weighed in with sixteen paid seventeen.  Then with ten points at the return fixture and another ten at Dudley Wood against Edinburgh the Heathens thought they had unearthed a superstar, however it was short lived when his form dropped and his next best score was seven points at Coventry in August.  It was diagnosed as kidney problems which had affected his form.
Frank was a full International rider being capped by his country in February 1950 in Adelaide against England where he scored three points.
He did not return in 1951 but continued to ride in Australia.

Frank passed away in February 1992