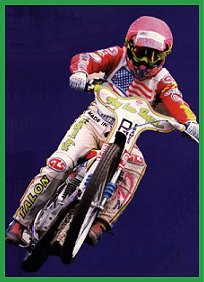 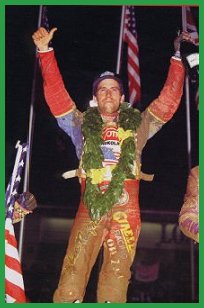 Greg joined Cradley in May of 1989 at the age of 18, after a trial the previous season alongside Billy Hamill. His first two seasons were a big learning curve as he adjusted to the British way of living and racing. His third season however was the breakthrough so widely expected and he finished 1991 with an average of 8.05. For the next three years, he topped 9.00 and for the two after that, made 10.00+.

From 1992, Greg has also ridden regularly for teams in Sweden, Poland and Denmark and he captained the Heathens for five seasons. The names 'Hancock and Hamill' became synonymous with Cradley during the nineties and the two formed without doubt the most formidable top two in the league.

On top of some of the best points scoring power in the league, 'Herbie' could easily claim to be one of the best team-riders in the business. And off-track, he is one of the nicest guys and best possible ambassadors that Speedway could wish for.

2000 has been Greg's fourth season with Coventry in the British Elite League and during that time, he's had some considerable international success. It will be old news to most that Herbie was crowned World Individual Champion in 1997 after leading the Grand Prix season from the opening round. Last season he lost the individual crown - eventually finishing in sixth place in the final Grand Prix standings - but joined Billy Hamill to take the World Pairs Championship.

Unsurprisingly to those who know much about Greg, he has used his World Championship and 10 year Testimonial year to great effect in 1998 by giving Speedway more media exposure than most other riders put together. Despite his numerous TV appearances on such shows as Channel Fours Under the Moon and Channel Fives Live and Dangerous, he has continued to consistently impress on the league stage for the Bees. Many will point to early 1998 for a lull in form but that quickly faded and Greg will still be considered by many as Coventry's rider of the year for all his time there so far.