Pekka Hautakami joined Cradley at the beginning of 1978 and made his BL debut against Kings Lynn in March. He had been recommended to Dan McCormick by countryman Ila Teromaa, who was to join the club two years later.
He came to Cradley as a twenty-two year old at the same time as Kristian Praestbro joined from Belle Vue.

He began riding Speedway in Vaasa when he was sixteen and rode for Finnish side Seinajoen Kotkat (Seinajoki's Speedway Eagles). He spent much of his early racing days on the ice, before making the transition to England. Stayed with the Heathens for two seasons before moving Belle Vue.

Pekka rode 51 matches for the Heathens with his best performance nine points against Poole in June with nine points from five rides. 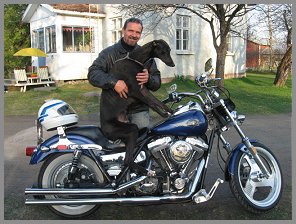 Pekka recently got in touch with us at the website, he is doing fine and works as a fireman in his home
town - Seinajoki.

After racing for Cradley and Belle Vue Pekka returned to Finland for family reasons, his son Aki was born in Manchester, who is now 29 and two daughters Sanna 20 and Emmi 15.
He rode for Seinajoki Kotkat for ten years and raced in Sweden for three different teams.  During those years he won the Finnish Championship seven times and in 80s won Leningrad´s (U.S.S.R) Championship as the first foreign rider.

Pekka is now retired from speedway but still rides his motorbikes