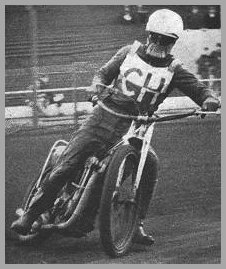 Profile...
John's main passion was for racing stock cars around Hednesford Raceway but when the Provincial League started in 1960 he decided to give speedway a go. He had a good pedigree as the son of Phil 'Tiger' Hart.
He joined Stoke in 1960 at their Sun Street venue and rode in second half races throughout the season.  He joined Cradley in 1961 and the first match was - at Stoke! 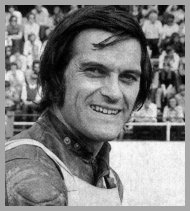 John had 2 rides for 1 point but soon settled in with the Heathens and ended the season with an average of 4.75.
He started early in 1962 with the televised BBC Television Pairs partnered Harry Bastable to a win with 13 points from his 6 rides.  He went on to score his first paid maximum in April against the Wolves and rack up many double figure scores, to put him in third heat-leader spot behind Ivor Brown and Harry Bastable. In 1963 John moved up to second heat-leader changing places with Harry and scoring 7 maximums throughout the season and even held the Silver Sash match race title briefly in May.
Again John improved in 1964 and challenged Ivor Brown's superiority with an average of 8.31 and finished just 50 points short of Ivor's total at the end of the year, despite being sidelined for 5 weeks, this was Johns peak as 1965 along with all the others he was pitched in with the big boys with the formation of the British League however he took the responsibility well and took over as Cradley's number one when Ivor Brown was badly hurt at Wimbledon in the Internationale in June.
John had many run-ins with the Cradley management over the years but was shocked when he was transferred along with George Major to Sheffield in 1966.  He stayed with the Tigers for 2 years and then moved on to Leicester before returning to the Heathens in 1971 but although still a popular Heathen was past his best after 10 years in the sport.
He decided to retire half way through 1972 though when his home town team Birmingham opened a year later he joined George Major again to average over 8 points a match in Division 2 for the Brummies before finally calling it a day 3 season later.

thanks to Peter Foster for help with the research