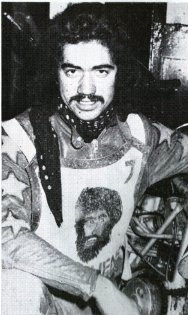 Maori, Jimmy Moore joined Cradley in the Dan McCormick era of 1977 and battled through the second half events with enough promise to gain both Cradley recognition and National League team outings.

His real chance came with more second half rides at Ellesmere Port, who had several links with Cradley around that time, including juniors John Hack & John Williams, and big money transfer, Phil Collins.
Aged just 18, Moore quickly claimed a team place with the Gunners and clocked up seven points on his debut. He continued to appear at both Dudley Wood and Thornton Road during the season, including two first team appearances for the Heathens.

Half way through the 1978 season after more time in the Cradley second halves, Jimmy this time broke into the team at National League Oxford. He displaced Mick Handley and went on to ride 13 matches for the Cheetahs after a debut score of paid eight from three rides. It was his last year with the Heathens though, making another three first team appearances in the British League and and scoring five points.
Also in '78, Moore contested the New Zealand World Championship Final, finishing with six points and took an impressive third place overall in Oxford's Stadium Trophy.