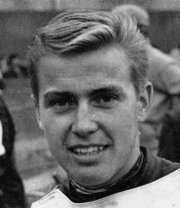 Lars Jansson was signed in mid-1968 as a replacement for the injured heatleader Tommy Bergqvist. He quickly settled into the number two riding slot and rattled up some good scores and impressive performances. As well as on-track performances, he became a hit with the female supporters thanks to his Swedish blond hair and blue eyes.

Lars' brother Bengt was a recognised Swedish international performer, and reached the heights of second place in the 1967 World Final, and third place in 1971. Bengt was at Hackney in '68 while Lars started the season with Glasgow. A string of machine problems dented his confidence though, and he was looking for a move when Cradley stepped in. He began with a baptism of fire in the local derby with Wolves, but scored six and showed the promise of what was to come. As well as his points and general performance though, Lars also made quite an impression with a spectacular crash at the end of August. He collided with Oxford's number one, Ronnie Genz, in the first heat of the night and almost scaled the top of the safety fence. He luckily escaped with no more than a damaged finger but both riders were rushed to hospital, to miss the rest of the meeting, and more in Genz's case. By the end of the season, Lars had been rewarded with a call-up to the Swedish test team, and finished his Cradley experience with a creditable average of more than 6.00. His introduction to the team coincided with the Heathens marked resurgence; He added heatleader power in a second string role, and won many admirers during his relatively short stay. He was not called upon in '69 though and rode a total of just eleven official (league and KO Cup) fixtures for the Heathens. <!--Footer--!>
Back to the Listing