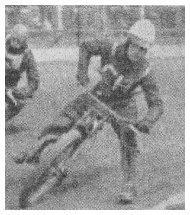 Les scored 224 League points in Cradley's first season in 1947 which put him in the top ten riders in the newly formed Third division. He was captain of the Heathens, aged just 24 - one of the youngest skippers of his time. He was Cradley's first captain and set a fine example by pushing his bike almost half a lap in heat 7 of Cradley's first League Match at Plymouth, he fell whilst chasing hard after Ivan Kessell - brother Ray and Plymouth's Doug Bell had already fallen on the previous lap and the two points that Les gained were the match winners. Les was Cradley's first track record holder too, getting a time of 81.6 secs. in the scratch race Final of the first meeting on 21st June 1947. He was recognised as one of the best broadsiders around, and along with brother Ray, was also an accomplished grasstracker.

Beaumont first rode Speedway at Tiger Stevenson's training school at Birmingham before joining the Heathens. Amongst his other talents was music, and the story goes that he used to entertain the team with his accordion!
His family owned a sweet shop in Cradley Heath and the derelict shop is still there!

When he left Dudley Wood in 1950 he joined Leicester and had three successful seasons with them maintaining an average of around 7 points per match.
He married a local girl and went on to become a successful businessman after retiring from the sport. Rode for Cradley from 1947-50.