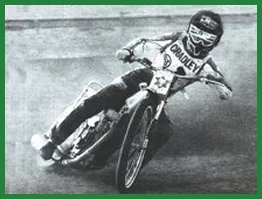 Profile...
Lance was recommended to Cradley by Bruce Penhall as early as 1980 but due to the strict rules on International licences he was not able to join the Heathens until he was 18 years old in 1982. 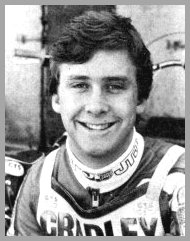 He made a great start in the Premiership scoring 7 +3 at Dudley Wood then 10+1 at Ipswich paired with Penhall, his form then dipped a little and he had problems in June when he broke his collar-bone riding in the States.  He came back the following month to help Cradley to the top of the league and joined Penhall to win the Dairy Crest Pairs at Dudley Wood on the 10th July, when Bruce controversially left in August Lance improved to score many double figure scores up until the end of the season.
1983 was of course Cradley's year and Lance was a big part of it with maximums on 30th April against Sheffield and against Kings Lynn in August, he surprised everyone by winning the Golden Hammer in between.
He rode in all the USA Test Matches and represented the US in the World Team Cup Final in Denmark.  He also reached his first World Final, scoring 4 points at Norden shortly after though he broke his collar-bone again in the USA and missed a month but returned to help Cradley win the Midland Cup Final.
Manager Colin Pratt decided to build his 1984 team around Lance and Erik Gundersen and he continued to improve with maximums coming thick and fast, on the International scene too Lance won the Overseas Final at Belle Vue then finish third in the Intercontinental Final.  The World Final itself was unforgettable too heat 20 saw Lance and Erik on 11 points whoever won would be World Champion,  Erik made the perfect start and it was left to Lance to face Hans Nielsen in a run-off for second again Hans made a perfect start and Lance finished on the rostrum in third place.
Lance couldn't agree terms for 1985 and was left without a track but still pursued his World Championship finishing 3rd in the Overseas and 2nd in the Intercontinental Final but managed only 6 points in the Final at Bradford.
He was loaned to Bradford in 1986/7 but there was still no place for him with the Heathens in 1988 and was loaned out again, this time to Kings Lynn, he stayed with the Stars in 1989 but due to 'contractual' problems just before the 1990 season Lance was left trackless again and was lost to British Speedway at the age of 27.

thanks to Peter Foster for help with research