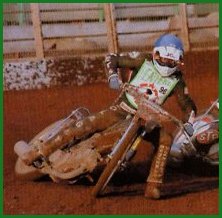 Niklas joined the Heathens in July 1996. A deal was actually done at the end of June to replace the injured John Wilson but Niklas was not available as he had a full time job in Sweden, however Sven Heiding persuaded him to join the Heathens for the rest of the season.
Niklas was on loan from Oxford who owned his contract, he previously rode for them in 1994 his progress there was halted with a broken collar-bone but Jan O Pedersen (Oxford team manager at the time) and Sven Heiding Heathens co promoter saw the potential in him from his Swedish scores where he had a league average of between seven and eight.

He made his debut at Loomer Road (Cradley's home during 1996) against London (Hackney) with a score of four points from four rides.  Following two away matches at Wolves and Belle Vue where he scored three points in each he rattled in twelve points against Hull though this was from seven rides.
This was Nik's best score though he did get ten at Peterborough in September.

Always difficult to settle with a team in July when other riders are established Niklas attained a creditable average of 5.43 from all his matches or 5.08 from League / KOCup