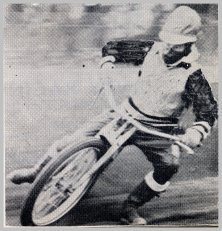 Nick started riding at his home track Coventry in the early 1950's he had spells with Brafield in the Southern Area League in 1954 / 55 and stayed with these local tracks until 1961 apart from a short spell with Oxford in 1959.  He toured South Africa in the winter of 1956 after a successful season with the Bees that year including a couple of maximums and ending the season with an average of over six points per match.  However his form dipped badly on his return completing the 1957 season with 3.26.
Nick spent most of his career at Coventry but finally made the move to Belle Vue in 1962, it proved disastrous and he couldn't find his form.  He joined the Heathens in the Provincial League in July scoring seven points on his debut against Wolves in the Dudley Wolves Trophy.
His scores were up and down but still managed an average of over six.  However disaster struck in the Provincial League Riders Qualifying Round at Exeter in August where he crashed and received head injuries and severe concussion.  This was to end his career.
Always immaculately turned out in shiny black leathers little has been written about Nick and he is rarely seen in speedway photographs, such a pity his association with the Heathens was so short.