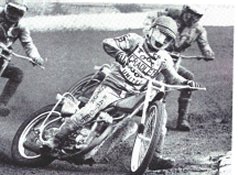 Dave was the 'Local boy makes good', after being born and bred a Black Country kid, graduated from cycle speedway with Oldbury Lions he joined Cradley after impressing at the Dudley Wood training school when 21.After a 'run around' Scunthorpe in 1972 he made enough impression to be drafted into the Cradley squad. He finished his first season, by winning the Ivor Hughes Trophy for best novice with a 15 point maximum. 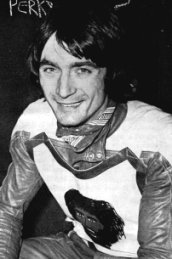 He was always a steady rather than sensational rider, but this was to his advantage in keeping a team place with the Heathens for the best part of ten years. He suffered a broken leg in 1974, which hindered his progress, but then battled through a couple more injuries to make a good impression over the following few seasons.

During his last three years with Cradley he had fewer chances in the first team, but was a solid performer at our sister tracks of Nottingham (Long Eaton) and Oxford. At the same time, he was called upon to deputise for the Heathens and always gave his usual determined best for his 'home' team. He was rewarded in 1982 with a testimonial meeting.

Dave was featured in Speedway Star's "Seven from Heaven" in December 2000 where he was asked to pick the seven former team-mates that he would like in his 'Dream Team'.
He still lives locally and now works at Lex, repairing trucks. He chatted much more however about his new hobbie of wheeling and dealing in antiques at car boot sales. Confessing to not really being an expert yet after only about five years, he has become a familiar sight around the big weekend sales and specialises in the highly collectable Carnival glass.
Incidentally, Dave's 1-7 team for the article was: Roy Trigg, Bernt Persson, Bruce Cribb, Chris Pidcock, John Boulger, Gary O'Hare & Bruce Penhall.